Hanging in The Trade Balance: Is Free Trade a Curse for Kazakhstan? 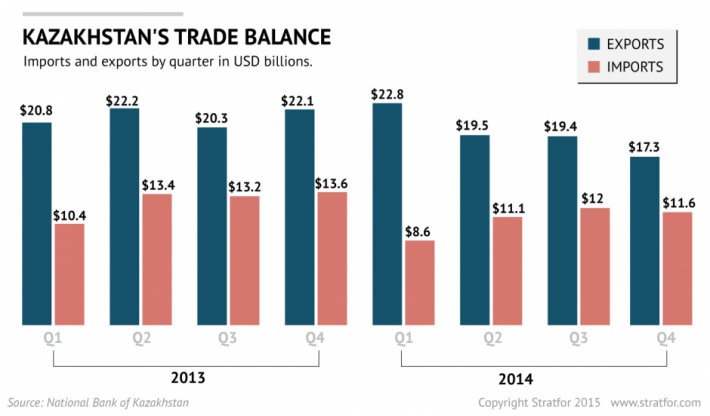 BACKGROUND: Instead of the expected free flow of goods across the Kazakhstani-Russian border as of January 1, we got what many rushed to call a trade war between the two countries. Media has been full of stories about the seizure of tons of beef, poultry meat, milk, chocolate, and other foodstuffs crossing to Kazakhstan from Russia allegedly for ānot meeting technical regulations.ā Russia reciprocated by refusing to let tons of Kazakhstani cheese and other dairy products into Russia for ānot meeting quality and safety requirements.ā On March 5, a ātemporaryā ban on imports of Russian gasoline was put in place as President Nazarbayev invoked EEU regulations that allowed protective measures, such as temporary bans on imports, in exceptional cases. Curiously, the latter measure was taken despite the chronic shortage of gasoline in Kazakhstan. Kazakhstani businessmen representing other sectors of the economy are now advocating a ban on Russian imports.

The immediate explanation for this turn of events is the rubleās depreciation by 47 percent against the tenge in 2014, resulting in a displacement of domestic products with significantly cheaper Russian imports. Though Kazakhstanās National Bank anticipated the ruble devaluation and devalued the tenge in February 2014, it did so only by 19 percent and has so far resisted further devaluation. Some experts anticipate that the double-digit inflation in Russia will eventually close the price gap on the same goods between the two countries. This, however, has not yet happened and remains a hypothetical scenario. Meanwhile, Kazakhstanās National Bank spends, according to the estimates of Moodyās Investors Service, US$ 2-3 billion per month to maintain the tengeās current exchange rate, while Russian products continue to flood the country, pushing local producers out of the market.

A case in point is the automobile industry. In November 2013, construction began on a car factory in Ust-Kamenogorsk, a city near the Russian border, to produce 120, 000 vehicles a year, three times the automobile production in the country. The decision to build the factory was based on the expectation that under the EEU free trade regime, car exports to Russia would bring windfall revenues. In 2014, Kazakhstan planned to assemble 60, 000 cars, 50 percent more than in 2013. Instead, by January 2015, the official automobile market had contracted by 28.5 percent, with the share of domestically produced cars dropping by 62.2 percent. As a result, the market share of cars assembled in Kazakhstan is only 12 percent, compared to 62 percent for cars assembled in Russia.

This is a good illustration of the overall trade balance between the two countries. In January 2015, Russian imports to Kazakhstan increased by 7.3 percent year-on-year, while Kazakhstani exports to Russia dropped by 41.2 percent.