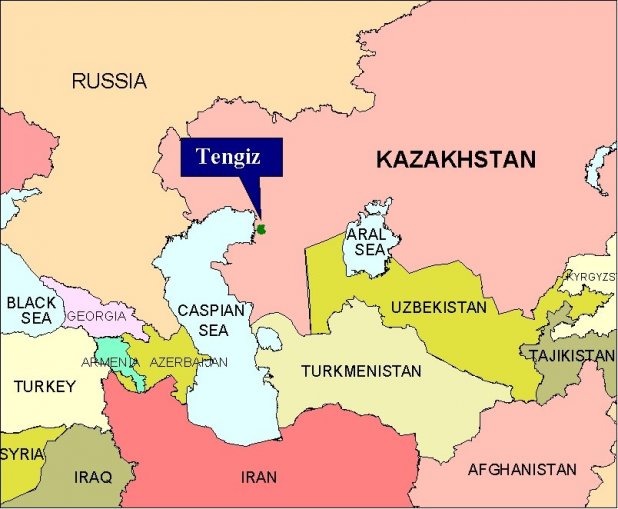 The Tengiz oil fields entered a new phase of production with the construction of its Second Generation Project (SGP) and the introduction of sour gas injection (SGI). This onshore development, which has been in the planning and approval stage since 2002, began in 2004 and required a total investment of $7.4bn. The integrated project was completed in the second half of 2008.

The Tengiz field, first discovered in 1979, has recoverable reserves estimated at between six billion and nine billion barrels. The field was jointly developed in 1993 as a 40-year venture between Chevron Texaco (50%), KazMunaiGaz (20%), US ExxonMobil (25%) and LUKArco (5%). The joint venture company is known as TengizChevrOil (TCO). Chevron is the operator of the TCO field.

Prior to its expansion in 2008, the Tengiz oilfield had 53 wells, tapping a column of crude oil around 1.6km thick. When the field was first tapped its oil pressure was 12, 000psi, but in 2004 the pressure came down to 10, 000psi in most areas and 8, 500psi in others. The SGI project used gas injection technology to boost the pressure and increase oil recovery, while the SGP increased the number of producers (wells) and improved and expanded the crude export infrastructure.

"Chevron is operator of the Tengiz field."

The two projects created over 7, 000 jobs in Kazakhstan and aided the development of the economy. A total investment of $20bn is envisaged for the duration of the 40 years of the Tengiz oil field venture.

TengizChevrOil intends to export more of the Tengiz field's additional capacity via the Caspian Pipeline Consortium pipeline running the 1, 500km from Tengiz to the Russian Black Sea port of Novorossiysk (thus solving the export problem from the remote Tengiz field).

Beginning of snowstorm in Tengiz, Kazakhstan