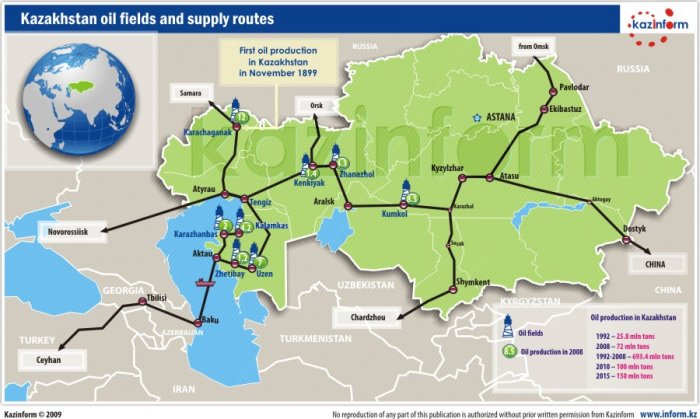 By Raushan Nurshayeva and Mariya Gordeyeva

ASTANA/MOSCOW, Sept 9 Kazakhstan could cut oil output by a tenth next year if prices drop to $30 per barrel, its energy official said, becoming one of the first big oil producers to acknowledge limits to its ability to withstand a battle for market share with OPEC.

It was not immediately clear whether the country would be forced to cut output because some production would be losing money at that price or whether it was voluntarily prepared to cut output, which is only partially controlled by the state.

Whatever the reason, the statement by Kazakhstan's deputy energy minister will be music to the ears of OPEC, which has kept output near record levels over the past year in the hope of depressing the production of higher cost crude oil by rivals.

Deputy Energy Minister Uzakbai Karabalin told reporters on Wednesday that if the oil price next year was $50 per barrel, Kazakhstan would produce 79 to 80 million tonnes, little changed from this year's forecast of 80.5 million tonnes.

But if the price drops to $40, Kazakhstan's output would be 77 million tonnes and if oil were to fall to $30, production would be cut to 73 million tonnes, Karabalin said.

Global oil prices have more than halved since last year to trade at below $50 per barrel, pressed by oversupply from OPEC and Russia, as well as a weakening China economy.

Karabalin, a former head of state energy firm KazMunaiGas, did not elaborate on how Kazakhstan would cut its output. Two industry sources said some options were cutting spending on well servicing and shutting down old wells.

Kazakhstan is the second biggest producer in the former Soviet Union, where the largest producer - Russia - has taken the opposite approach to dealing with falling crude prices.

Russian Energy Minister Alexander Novak was quoted as saying by Interfax on Wednesday that Russia might increase output by 1 percent this year from 10.6 million barrels per day in 2014.

Mexico, which like Russia and Kazakhstan is not an OPEC member, said it would also not consider cutting oil output at the moment.

Oil of Kazakhstan. The Photographic History