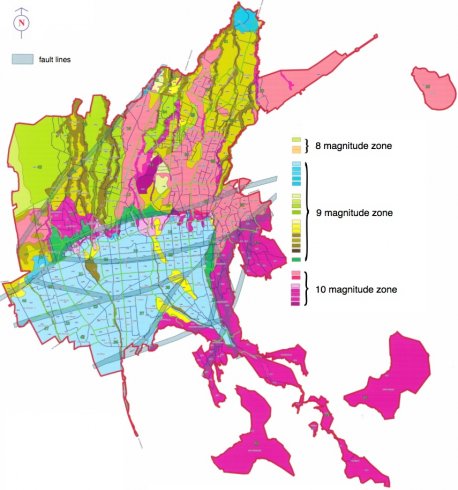 Almaty is located near relatively young mountains in a seismologically active zone, but earthquakes of such magnitude are extremally rare. People are more of less used to 2-3-magnitude earthquake, but today's 5.2-magnitude one got many hair standing on end.

The 5.2M earthquake focus was mere 41 km east from the large Kazakhstani city at the depth of 10 km, according to the Seismological Experimental and Methodological Expedition of the Science Committee of the Kazahkstan Ministry of Education and Science.

The European-Mediterranean Seismological Centre (EMSC) graded the earthquake as strong:

The earthquake was preceded by a long low rumbling, "a very scary one", one of Almaty residents who was not asleep so late at night told Tengrinews. The rumbling was followed by a very strong tremor, with no jolts that would stand out, just tremor. The tremor seemed horizontal and lasted nonstop for 30 or 40 seconds. No recurring tremor waves followed, no aftershocks could be felt.

Almaty is a city with nearly 2 million residents, but the earthquake happened deep in the night in the hour when people are fast asleep, so quite few people were seen running out into the streets and away from tall buildings. Some were lucky enough to sleep through, other got up, got dressed, but feeling that the the tremor subsided just went back to sleep. There were few to no doors slamming or alarmed voiced in the night.

Director of Almaty-based Seismology Institute Tanatkan Abakanov said that the earthquake had only one weak aftershock. "Earthquakes of below magnitude 7 cannot be forecasted. (...) But we are 70 percent sure that there will be no earthquakes of over 7 magnitude in Almaty before the year's end, " he said.

The earthquake caused no destructions or casualties in Almaty.

Vladimir Bozhko, Kazakhstan's Vice-Minister of Interior, said that the emergency services had completed a preliminary inspection of the city and found no destructions. Rapid response centres have been set up in and around the city and emergency crews are now throughly inspecting the facilities that can pose a chemical hazard and utility facilities to make sure they are undamaged. Another emergency team was dispatched into the mountains to monitor the mountain lakes to make sure that the earthquake had not triggered any movement in the moraine-dammed lakes and the city was not treated by a mud flood.

Deputy head of Almaty Emergency Department Nurlan Madyarov confirmed that no buildings were damaged by the earthquake: "There are no casualties or destructions. All the facilities are functioning as per normal. There was no panic in the city."