These Satellite Views of Ancient Earthworks Are Stirring Debate 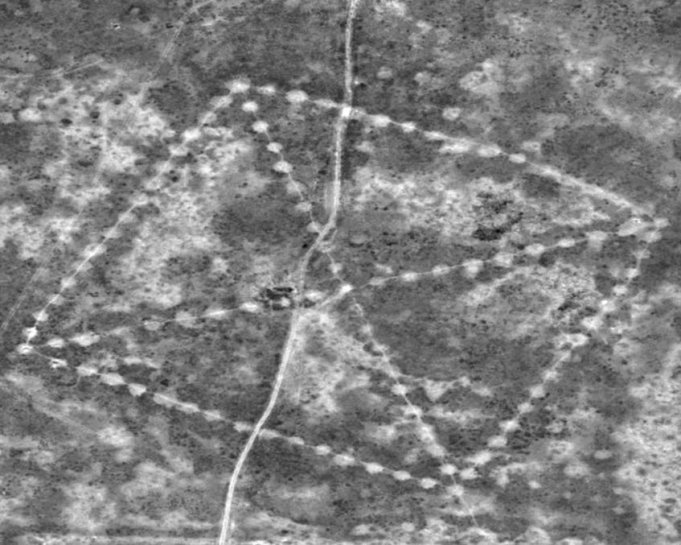 After watching a television show about ancient pyramids built outside Egypt, Dmitriy Dey wondered if his own Central Asian nation of Kazakhstan might harbor such exotic ruins. A business manager in the northern city of Kostanay, Dey began to study satellite images on Google Earth during his off hours.

He found no pyramids, but he did spot dozens of odd, human-made features scattered across a remote area of the steppe that‚Äôs half the size of New Jersey.

Eight years after he saw the TV show, Dey‚Äôs unusual discovery is stoking a public debate about these peculiar mounds and earthworks. Though barely noticeable on the ground, the forms take on a dazzling array of shapes‚Äîincluding huge circles, crosses, squares, and swastikas‚Äîwhen seen from high above.

‚ÄúIt required immense effort to build these, ‚Äù says Giedre Motuzaite Matuzeviciute, an archaeologist at the Lithuanian Institute of History in Vilnius. Matuzeviciute is part of an international team, led by Andrey Logvin of Kostanay University, that has studied two of 55 sites identified as human-made features on the Kazakh steppe. ‚ÄúThe soil there is very heavy, like clay. And the earthworks are located in the middle of nowhere.‚Äù

This ring-shaped earthwork may date to the dawn of the Iron Age (about 800 B.C.) when Central Asia‚Äôs first towns were being built.

Located in the Turgai region of central Kazakhstan, in a sparsely populated area, the earthworks include 21 crosses, one square, four rings, and one swastika-like feature. Many cover territory larger than a football field.

Matuzeviciute, who learned about the features four years ago and who credits Dey with their discovery, says that there are two distinct types. The first group is located on high plateaus overlooking river watersheds. The second group, including one swastika-like symbol, is located along rivers and close to burial sites associated with the early centuries A.D. Swastika-like signs are common across ancient Central Asia.

Two bodies of water that touch Spain are the North Atlantic Ocean, and the mediterranian sea.