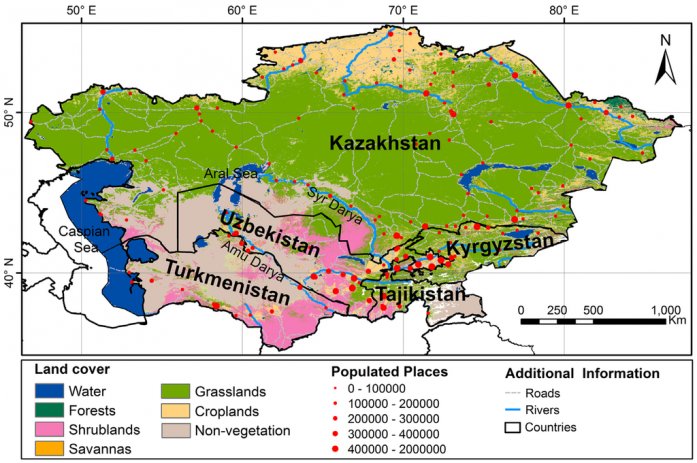 Forested areas amount to only 5 percent of Kazakhstan's territory, as the steppes and deserts are virtually treeless. Drought-resistant plants such as wormwood, tamarisk (salt cedar), and feather grass are native to the steppes, although grain crops have largely supplanted native vegetation in the northern steppes. Scrub plants are common in the Qyzylqum desert. Thickets of elm, poplar, reeds, and shrubs grow along the banks of rivers and lakes. Coniferous trees, such as spruce, larch, cedar, and juniper, grow in thick forests on the mountain slopes in the extreme east and southeast.

Animal life in Kazakhstan varies by region. The republic is home to the extremely rare saiga antelope, which is protected by government decree. The saiga inhabits the steppes, as do roe deer, wolves, foxes, and badgers. Various animals thrive in the deserts, including gazelles; rodents, such as gophers, sand rats, and jerboas; and reptiles, such as lizards and snakes. Wild boars, jackals, and deer are found near the rivers and lakes. The mountains are home to ibex (wild goats), lynx (wildcats), wolves, wild boars, and brown bears. The endangered snow leopard, which has long been illegally hunted for its fur, also lives in the mountains, preying on ibex. Kazakhstan's many different species of birds include ring-necked pheasants, partridges, black grouse, bustards, hawks, and falcons, all of which are native to the steppes. Eagles and lammergeyers (a type of vulture) nest mostly in the mountainous regions.

[ad >] Are you lazy student? The smallest wireless audio headset will help you out! 6mm diameter (0.24 inch) - it hides inside ear completely and has no wires. Go to to read about it. [< ad]

Which type of crop insurance for Kazakhstan?

Risk plays an important role in agricultural decision-making, particularly in those regions that are remarkably exposed to natural hazards and underdeveloped input and output markets. This is especially true for crop production in CIS countries where many farms have to deal with low liquidity and sharp continental climate at the same time. The discussion paper analyses the results of expert interviews, a workshop with key-informants and a farm survey which investigated production conditions, risk attitudes and risk management techniques with respect to the requirements of a functioning …